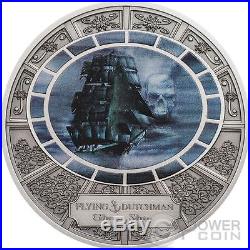 FLYING DUTCHMAN Ghost Ship Silver Coin 5$ Cook Islands 2016Mintage limited to 1.000 pieces worldwide. The coin reverse depicts the Flying Dutchman in the fog with a human skull beside. The coins obverse depicts the effigy of Her Majesty Queen Elizabeth II and the inscriptions: Cook Islands the issue country, 2016 the issue year, 5 Dollars – the face value. Flying Dutchmen The first Flying Dutchman Legend was written in 1795, when Irish pickpocket George Barrington wrote his “Voyage to Botany Bay”. This was the result of captain Bernard Fokke’s behaviour: he was known for the “devilish” speed on his