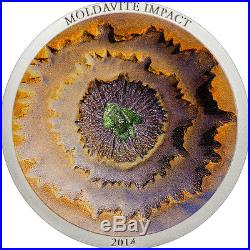 2014 MOLDAVITE METEORITE METEOR Silver Coin 5$ Cook Islands RAREHard to find coin in the original and successful CIT series of Meteorite coins. Coin displays the Moldavite Meteorite and actually has an original piece of the meteorite embedded in the coin with unique concave coin design. Moldavite, a natural bottle-green glass, originated from a high-pressure modification of quartz, which was caused by the impact of a meteorite in Bavaria 15 million years ago. Upon hitting the earth the meteorite, which had a diameter of 1500 m, had reached a speed of 70000 km/h, through which the discovery site, also known 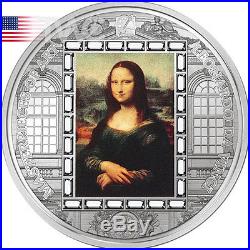 Cook Islands 2016 20$ Mona Lisa Masterpieces Of Art 3 oz Proof Silver Coin2208 W Chicago Ave Chicago, IL 60622 United States. Issued as part of the extremely successful Masterpieces of Art series, this eye-catching silver coin boasts the beautiful design, 26 genuine Swarovski crystals as well as the limited mintage (only 1506 pieces worldwide). Struck of 3 oz. 999 pure silver to the flawless proof quality, this Cook Islands coin is a tribute to the most famous painting of all time – “Mona Lisa” by Leonardo da Vinci. The effigy of Queen Elizabeth II is traditionally featured on the