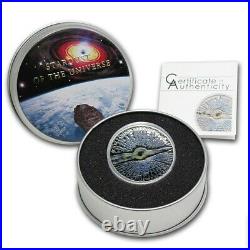 Cook Islands 2013 Chelyabinsk Meteorite Insert Russia Silver Proof Coin COAMintage of only 2,500 coins! On February 15, 2013 a meteor exploded over Chelyabinsk in the Russian Ural region. NASA estimated it to be the largest meteor since 1908. Now is your chance to have a small piece of this meteorite. 925 Silver coin you experience the explosion through the eyes of the people of Chelyabinsk. Broken window panes and the passing meteoroid trail in the sky. The design is in vivid color and also features an insert of a piece of the Chelyabinsk meteorite. This amazing coin comes in 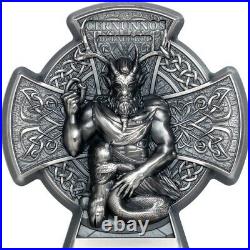 Cernunnos Horned God 2021 £5 3 oz Pure Silver Smartminting Coin Isle of ManThe third edition of the spectacular Isle of Man series shows Cernunnos on the ornamented Celtic cross. The pagan god is portrayed like many imageries of the Gallo-Roman period with human torso, stag’s feet and mighty antlers. He is accompanied by a snake and holds a torque, which is a sacred neck ornament of Celtic gods and a symbol of source of power and wealth. In Paganism, he is an archaic and powerful deity who is also worshipped as the “Lord of Wild Things”. As the Christian