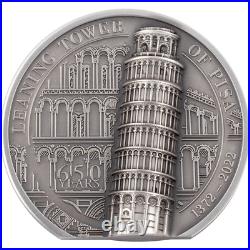 2022 Cook Island Leaning Tower of Pisa 2oz Silver Antique Finish CoinPretty much everyone is familiar with the Leaning Tower of Pisa. It is one of the most photographed landmarks in the world and has been a UNESCO World Heritage Site since 1987. 2022 is the 650. Anniversary of the completion of this famous building and it is fair to say that no other building in the world has become so popular for its flaws. Construction began in 1173 and was originally designed as a bell tower. When the third floor was completed 5 years later, it started to lean