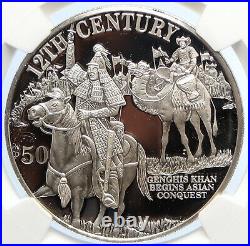 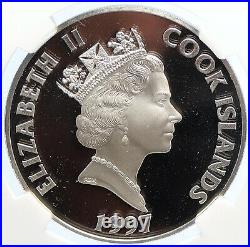 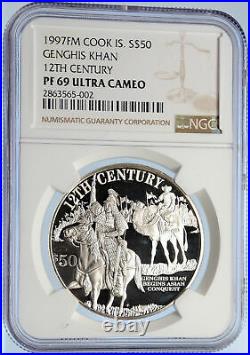 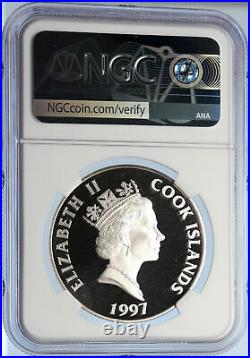 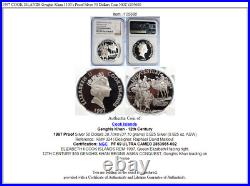 Item: i105680 Authentic Coin of. Genghis Khan – 12th Century 1997 Proof Silver 50 Dollars 38.7mm (31.10 grams) 0.925 Silver 0.925 oz. PF 69 ULTRA CAMEO 2863565-002 ELIZABETH II COOK ISLANDS RDM 1997, Queen Elizabeth II facing right. He came to power by uniting many of the nomadic tribes of Northeast Asia, and, after being proclaimed the universal ruler of the Mongols, or. He launched the Mongol invasions, which ultimately conquered most of Eurasia, reaching as far west as Poland and as far south as Egypt. His major campaigns include those against the Qara Khitai, Khwarezmia and the Western Xia and Jin dynasties, and his generals conducted further raids into medieval Georgia, the Kievan Rus’, and Volga Bulgaria. Genghis Khan and his empire have a fearsome reputation in local histories. Many medieval chroniclers and modern historians describe Genghis Khan’s conquests as wholesale destruction on an unprecedented scale, causing great demographic changes and a drastic decline of population as a result of mass exterminations and famine. A conservative estimate amounts to about four million civilians (whereas other figures range from forty to sixty million) who lost their lives as a consequence of Genghis Khan’s military campaigns. In contrast, Buddhist Uyghurs of the kingdom of Qocho, who willingly left the Qara Khitai empire to become Mongol vassals, viewed him as a liberator. Genghis Khan was also portrayed positively by early Renaissance sources out of respect for the great spread of culture, technology and ideas under the Mongol Empire. By the end of the Great Khan’s life, the Mongol Empire occupied a substantial portion of Central Asia and China. Due to his exceptional military successes, Genghis Khan is often considered to be one of the greatest conquerors of all time. Beyond his military accomplishments, Genghis Khan also advanced the Mongol Empire in other ways. He decreed the adoption of the Uyghur script as the Mongol Empire’s writing system. He also practised meritocracy and encouraged religious tolerance in the Mongol Empire, unifying the nomadic tribes of Northeast Asia. Present-day Mongolians regard him as the founding father of Mongolia. He is also credited with bringing the Silk Road under one cohesive political environment. This brought relatively easy communication and trade between Northeast Asia, Muslim Southwest Asia, and Christian Europe, expanding the cultural horizons of all three areas. The Cook Islands (Cook Islands Maori: Kuki’Airani) is a self-governing island country in the South Pacific Ocean in free association with New Zealand. It comprises 15 islands whose total land area is 240 square kilometres (92.7 sq mi). The Cook Islands’ Exclusive Economic Zone (EEZ) covers 1,800,000 square kilometres (690,000 sq mi) of ocean. New Zealand is responsible for the Cook Islands’ defence and foreign affairs, but they are exercised in consultation with the Cook Islands. In recent times, the Cook Islands have adopted an increasingly independent foreign policy. Although Cook Islanders are citizens of New Zealand, they have the status of Cook Islands nationals, which is not given to other New Zealand citizens. The Cook Islands’ main population centres are on the island of Rarotonga (10,572 in 2011), where there is an international airport. There is a larger population of Cook Islanders in New Zealand itself; in the 2013 census, 61,839 people said they were Cook Islanders, or of Cook Islands descent. With about 100,000 visitors travelling to the islands in the 2010-11 financial year, tourism is the country’s main industry, and the leading element of the economy, ahead of offshore banking, pearls, and marine and fruit exports. World-renowned expert numismatist, enthusiast, author and dealer in authentic ancient Greek, ancient Roman, ancient Byzantine, world coins & more. Ilya Zlobin is an independent individual who has a passion for coin collecting, research and understanding the importance of the historical context and significance all coins and objects represent. Send me a message about this and I can update your invoice should you want this method. Getting your order to you, quickly and securely is a top priority and is taken seriously here. Great care is taken in packaging and mailing every item securely and quickly. What is a certificate of authenticity and what guarantees do you give that the item is authentic? You will be very happy with what you get with the COA; a professional presentation of the coin, with all of the relevant information and a picture of the coin you saw in the listing. Additionally, the coin is inside it’s own protective coin flip (holder), with a 2×2 inch description of the coin matching the individual number on the COA. Whether your goal is to collect or give the item as a gift, coins presented like this could be more prized and valued higher than items that were not given such care and attention to. When should I leave feedback? Please don’t leave any negative feedbacks, as it happens sometimes that people rush to leave feedback before letting sufficient time for their order to arrive. The matter of fact is that any issues can be resolved, as reputation is most important to me. My goal is to provide superior products and quality of service. How and where do I learn more about collecting ancient coins? Visit the Guide on How to Use My Store. For on an overview about using my store, with additional information and links to all other parts of my store which may include educational information on topics you are looking for. This item is in the category “Coins & Paper Money\Coins: World\Australia & Oceania\Other Oceania Coins”. The seller is “highrating_lowprice” and is located in this country: US. This item can be shipped worldwide.