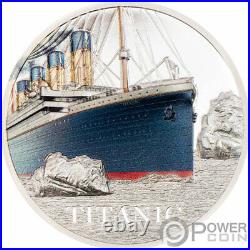 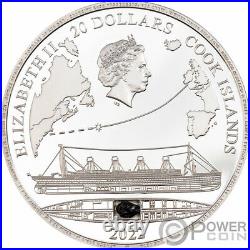 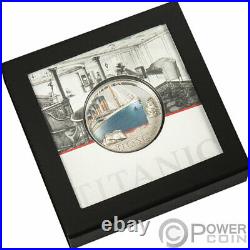 93.3 (3 oz). This amazing 3 Oz Silver coin is dedicated to the Titanic and its tragic story. The coin comes in a case, accompanied by the Certificate of Authenticity. Limited mintage of only 500 pcs worldwide! The reverse of the coin depicts a colored image of the sadly famous Titanic, surrounded by the fatal icebergs that caused its sink on April 14th, 1912. The reverse also presents an inscription with the name of the vessel: “TITANIC”. Just a handful of artifacts from the Titanic have made it back to the water surface, one of them is a coal lump which was recovered in 2000 and whose pieces have been incorporated on the obverse of this coin. The obverse also features an image with the route of the Titanic and the exact point where it sank in the Atlantic Ocean. At the top of the obverse, the effigy of Her Majesty Queen Elizabeth II and the inscriptions: “ELIZABETH II” – the name of the Queen, “20 DOLLARS” – the face value, “COOK ISLANDS” – the issuing country and “2022″ – the year of issue. This item is in the category “Coins & Paper Money\Coins: World\Australia & Oceania\South Pacific”. The seller is “powercoin_italy” and is located in this country: IT.