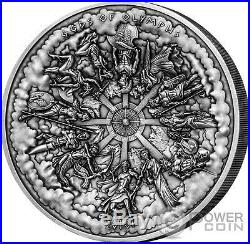 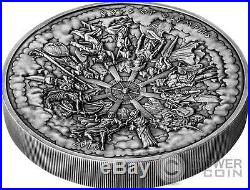 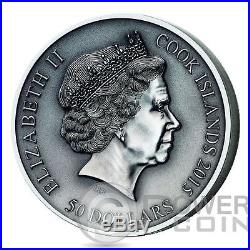 This 1 kilo pure Silver Coin is a spectacular Three Dimensional Effect Coin with Antique Finish dedicated to all the most known Gods of Olympus. It is the first kilo coin with Multiple Layer Minting Technique. Strictly limited mintage to only 199 pieces worldwide! The coin featured here takes the premium to the extreme, stretching the concept into the kilo realm with a hefty 1,000g of antique finish fine silver. Depicting all twelve of the main gods in Greek mythology arranged in an arc around the coin centre, its a very attractive design, having all of the Dodekatheon placed on a cloud-filled background with a centre design quite close in appearance to the aforementioned Temple of Heaven release. Using the same Multiple Layer Minting Technique employed on the superb Temple of Heaven coin, it has a deep level of relief (up to 5mm) on its almost concave reverse face. Issued for the Cook Islands, the coins obverse depicts the Queen Elizabeth II. Gods of Olympus In the ancient Greek religion and Greek mythology, the Twelve Olympians are the major deities of the Greek pantheon, commonly considered to be Zeus, Hera, Poseidon, Demeter, Athena, Apollo, Artemis, Ares, Aphrodite, Hephaestus, Hermes and either Hestia, or Dionysus. Hades and Persephone were sometimes included as part of the twelve Olympians (primarily due to the influence of the Eleusinian Mysteries), although in general Hades was excluded, because he resided permanently in the underworld and never visited Olympus. King of the gods and ruler of Mount Olympus; god of the sky, lightning, thunder, law, order, justice. Youngest child of the Titans Cronus and Rhea. Symbols include the thunderbolt, eagle, oak tree, scepter, and scales. Brother and husband of Hera, although he had many lovers, also brother of Poseidon, Hades, Demeter, and Hestia. Queen of the gods and the goddess of marriage and family. Symbols include the peacock, cuckoo, and cow. Youngest daughter of Cronus and Rhea. Wife and sister of Zeus. Being the goddess of marriage, she frequently tried to get revenge on Zeus’ lovers and their children. God of the seas, earthquakes, and tidal wave. Symbols include the horse, bull, dolphin, and trident. Middle son of Cronus and Rhea. Brother of Zeus and Hades. Married to the Nereid Amphitrite, although, like most male Greek Gods, he had many lovers. Goddess of fertility, agriculture, nature, and the seasons. Symbols include the poppy, wheat, torch, cornucopia, and pig. Middle daughter of Cronus and Rhea. Goddess of wisdom, reason, intelligent activity, literature, handicrafts and science, defense and strategic warfare. Symbols include the owl and the olive tree. Daughter of Zeus and the Oceanid Metis, she rose from her father’s head fully grown and in full battle armor after he swallowed her mother. Goddess of the hunt, virginity, archery, the moon, and all animals. Symbols include the moon, deer, hound, she-bear, snake, cypress tree, and bow and arrow. Daughter of Zeus and Leto and twin sister of Apollo. God of war, violence, and bloodshed. Symbols include the boar, serpent, dog, vulture, spear, and shield. Son of Zeus and Hera, all the other gods (except Aphrodite) despised him. His Latin name, Mars, gave us the word martial. Goddess of love, beauty, and desire. Symbols include the dove, bird, apple, bee, swan, myrtle, and rose. Daughter of Zeus and the Oceanid Dione, or perhaps born from the sea foam after Uranus’ semen dripped into the sea after being castrated by his youngest son, Cronus, who then threw his father’s genitals into the sea. Married to Hephaestus, although she had many adulterous affairs, most notably with Ares. Her name gave us the word “aphrodisiac”, while her Latin name, Venus, gave us the word “venereal”. Master blacksmith and craftsman of the gods; god of fire and the forge. Symbols include fire, anvil, axe, donkey, hammer, tongs, and quail. Son of Hera, either by Zeus or alone. Married to Aphrodite, though unlike most divine husbands, he was rarely ever licentious. His Latin name, Vulcan, gave us the word volcano. Messenger of the gods; god of commerce, thieves, eloquence and streets. Symbols include the caduceus (staff entwined with two snakes), winged sandals and cap, stork, and tortoise (whose shell he used to invent the lyre). Son of Zeus and the nymph Maia. The second-youngest Olympian, just older than Dionysus. Goddess of the hearth and of the right ordering of domesticity and the family; she was born into the first Olympian generation and was one of the original twelve Olympians. Some lists of the Twelve Olympians omit her in favor of Dionysus, but the speculation that she gave her throne to him in order to keep the peace seems to be modern invention. She is the first child of Cronus and Rhea, eldest sister of Hades, Demeter, Poseidon, Hera, and Zeus. God of wine, celebrations, and ecstasy. Patron god of the art of theatre. Symbols include the grapevine, ivy, cup, tiger, panther, leopard, dolphin, goat, and pinecone. Son of Zeus and the mortal Theban princess Semele. Married to the Cretan princess Ariadne. The youngest Olympian god, as well as the only one to have a mortal mother. The item “GODS OF OLYMPUS Multiple Layer Relief 1 Kilo Silver Coin 50$ Cook Islands 2016″ is in sale since Tuesday, May 02, 2017. This item is in the category “Coins & Paper Money\Coins\ World\Australia & Oceania\Other Oceania Coins”. The seller is “powercoin_italy” and is located in Roma. This item can be shipped worldwide.