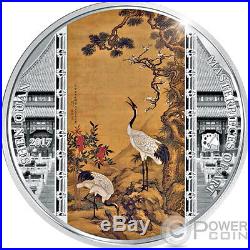 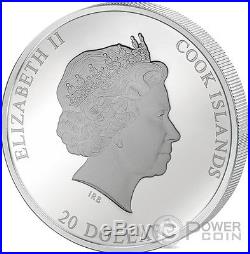 93.3 (3 oz). This wonderful 3 Oz Silver coin is part of the Masterpieces of Art series and features the masterpiece of Shen Quan – the Pine, Plum and Cranes, a hanging scroll painted with ink and colour on silk. The coin presents 18 beautiful Swarovski inserts, has a Proof quality and comes in a luxury case, along with the Certificate of Authenticity. Limited mintage to 1.759 pieces worldwide. The reverse of the coin features the beautiful Pine, Plum and Cranes painting of Shen Quan, a Chinese painter with a big influence in Japanese Art. He was specialized in bird and flower painting with a very realistic but also very decorative style. On the right of the reverse, the inscription: MASTERPIECES OF ART the name of the series. On the left, the inscriptions: 2017 the year of issue and SHEN QUAN the name of the painter and of the coin. The obverse of the coin features the effigy of Her Majesty Queen Elizabeth II and the inscriptions: ELIZABETH II the name of the Queen, COOK ISLANDS the issue country and 20 DOLLARS the face value. Shen Quan Shen Quan was a Chinese painter during the Qing Dynasty (16441912). His courtesy name was Nanpin and his sobriquet was Hengzhai. His works became influential in Japanese Edo period art. Shen was born in Deqing in Zhejiang province. He specialized in bird-and-flower painting, and was influenced by Bian Jingzhao and Lü Ji. His works were painted in a very realistic style, and he had many students and patrons. Shen was invited to Japan by a high official. He arrived in Nagasaki in the final month of 1731 with two students, acquiring many Japanese students after his arrival. His paintings soon became very popular, and after his 1733 return to China he continued to send paintings back to Japan. Shen had many pupils while in Japan; his most important was Kumashiro Yhi, who in turn taught S Shiseki and Kakutei. Other artists influenced by Shen included Katsushika Hokusai, Maruyama kyo, and Ganku. The item “SHEN QUAN Masterpieces of Art 3 Oz Silver Coin 20$ Cook Islands 2017″ is in sale since Thursday, June 15, 2017. This item is in the category “Coins & Paper Money\Coins\ World\Australia & Oceania\Other Oceania Coins”. The seller is “powercoin_italy” and is located in Roma. This item can be shipped worldwide.