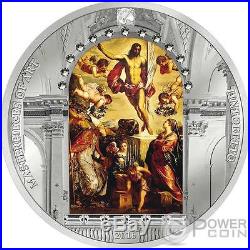 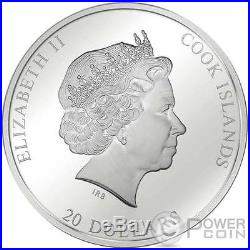 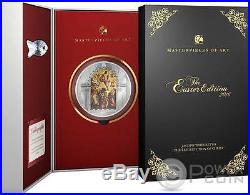 93.3 (3 oz). This is the first Easter Edition of the beautiful series Masterpieces of Art and features the painting Resurrection of Jesus by Italian painter Tintoretto. The 3 ounces Silver coin has a beautiful color and gold application. 19 sparkling Swarovski crystals decorate the picture. A noble whitebox and a Swarovski crystal fish shaped are included. Limited mintage to 1.575 pieces worldwide! The reverse of the coin depicts the painting Resurrection of Jesus by Tintoretto. The coin has 19 special inserts – Swarovski crystals over the image with Jesus and the angels. Another beautiful Swarovski crystals, with a special fish shape (symbol of Christian Easter) and eyelet is included with this coin. On the right side of the reverse, the inscription: Tintoretto the Italian painter. In the left side, the inscription: Masterpieces of Art the name of the series. On the bottom of the reverse, the year of issue, 2016. The obverse of the coin depicts the effigy of Her Majesty Queen Elizabeth II. All around, the inscriptions: “ELIZABETH II”, “COOK ISLANDS” (issuer), “20 DOLLARS” (face value). Resurrection of Jesus The resurrection of Jesus is the Christian religious belief that, after being put to death, Jesus rose again from the dead. It is the central tenet of Christian theology and part of the Nicene Creed: “On the third day he rose again in accordance with the Scriptures”. In the New Testament, after the Romans crucified Jesus, he was anointed and buried in a new tomb by Joseph of Arimathea but God raised him from the dead and he appeared to many people over a span of forty days before he ascended into heaven, to sit at the right hand of God. Paul the Apostle declared that “Christ died for our sins according to the scriptures; And that he was buried, and that he rose again the third day according to the scriptures”. The chapter states that such a belief in both the death and resurrection of Christ is of central importance to the Christian faith: And if Christ has not been raised, then our preaching is in vain and your faith is in vain. ” Paul further asserted “And if Christ has not been raised, your faith is futile and you are still in your sins. Then those also who have fallen asleep in Christ have perished. If in Christ we have hope in this life only, we are of all people most to be pitied. Christians celebrate the resurrection of Jesus on Easter Sunday, two days after Good Friday, the day of his crucifixion. Easter’s date corresponds roughly with Passover, the Jewish observance associated with the Exodus, that is fixed for the night of the Full moon near the time of the spring equinox. The item “RESURRECTION OF JESUS Tintoretto Easter 3 Oz Silver Coin 20$ Cook Islands 2016″ is in sale since Monday, March 28, 2016. This item is in the category “Coins & Paper Money\Coins\ World\Australia & Oceania\South Pacific”. The seller is “powercoin_italy” and is located in Roma. This item can be shipped worldwide.