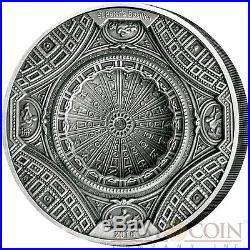 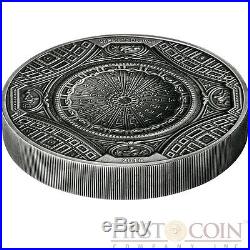 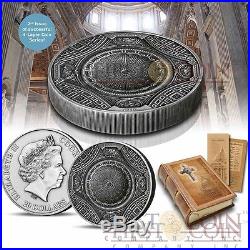 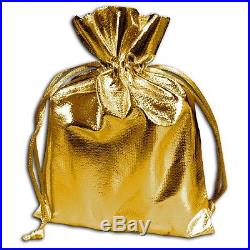 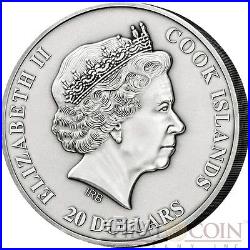 2nd coin of the series – very successful series! Value of 1st coin has raised almost two times. You can leave a comment in your order with your preferences about serial number (we will do our best). Coin depicts ceilings of the SAINT PETER’S BASILICA in Vatican, Italy. Very unique design: CONCAVE SHAPE “Four Layer” minting technique. 5 mm lowest relief with 3D Effect volume. Coins reverse consists of four different depths creating a three dimensional effect! Innovative “Four Layer” minting technique (concave shape coin). Extremely high international collectible demand. Highly appreciated in investing in Collectible Coins. Extremely limited mintage of 999 coins in the world. 100 grams (3.2 oz) of pure 99.9% silver. Official Certificate of Authenticity with a serial number (leave us your preferences). Offered in a luxury box as Vatican’s book style. Free golden pouch included (similar to the one on the picture). Concave “Four Layer” minting technique. 5 mm Ultra high relief. Box as Vatican’s book style. Certificate with a serial number (leave us your preferences). Successful concept of a CONCAVE SHAPE silver coin has been started in 2015 from The Temple of Heaven coin. The value of The Temple of Heaven coin. (1st coin of the series) has raised almost two times. The pure silver coin introduces the brand-new 4-layer minting technique that achieves a deep of up to 5mm! Furthermore, they impress with their various engraved details and Antique finish obverse. SAINT PETER’S BASILICA IN VATICAN. The Papal Basilica of St. Peter in the Vatican, or simply St. Peter’s Basilica (Latin: Basilica Sancti Petri; Italian: Basilica Papale di San Pietro in Vaticano), is an Italian Renaissance church in Vatican City, the papal enclave within the city of Rome. Designed principally by Donato Bramante, Michelangelo, Carlo Maderno and Gian Lorenzo Bernini, St. Peter’s is the most renowned work of Renaissance architecture and one of the largest churches in the world. While it is neither the mother church of the Catholic Church nor the cathedral of the Diocese of Rome, St. Peter’s is regarded as one of the holiest Catholic shrines. It has been described as “holding a unique position in the Christian world” and as “the greatest of all churches of Christendom”. Catholic tradition holds that the Basilica is the burial site of St. Peter, one of Christ’s Apostles and also the first Pope; supposedly, St. Peter’s tomb is directly below the high altar of the Basilica. For this reason, many Popes have been interred at St. Peter’s since the Early Christian period. There has been a church on this site since the time of the Roman Emperor Constantine the Great. Construction of the present basilica, replacing the Old St. Peter’s Basilica of the 4th century AD, began on 18 April 1506 and was completed on 18 November 1626. Peter’s is famous as a place of pilgrimage and for its liturgical functions. The Pope presides at a number of liturgies throughout the year, drawing audiences of 15,000 to over 80,000 people, either within the Basilica or the adjoining St. Peter’s has many historical associations, with the Early Christian Church, the Papacy, the Protestant Reformation and Catholic Counter-reformation and numerous artists, especially Michelangelo. As a work of architecture, it is regarded as the greatest building of its age. Peter’s is one of the four churches of Rome that hold the rank of Major Basilica. Contrary to popular misconception, it is not a cathedral because it is not the seat of a bishop; the Cathedra of the Pope as Bishop of Rome is in the Archbasilica of St. This unique coin is highly limited to only 999 pieces worldwide. Comes with a Certificate of Authenticity with a serial number issued by Cook Islands (leave us your preferences about serial number). Highly appreciated in an investing in collectible low mintage coins. Present this beautiful coin to your loved one for any occasions or a great business gift. The item “Cook Islands 2016 ST PETERS BASILICA 4 Layer $20 Silver coin 100g after Temple” is in sale since Sunday, March 20, 2016. This item is in the category “Coins & Paper Money\Coins\ World\Australia & Oceania\South Pacific”. The seller is “firstcoincompany” and is located in Santa Clara, California. This item can be shipped worldwide.